The Registrar will revoke a design if:

For this to happen, the person who claims that they were entitled to register the design must apply to the Registrar (under s 51) for revocation of the registration on these grounds.

If the design is revoked, the person who was originally entitled to register it may now be entitled to file a new application for the design (see ‘Registration by the correct owner after revocation’ below). If so, the priority date will be the same as in the original application (s 55).

In John Michael Jarvie v Comtec Industries Pty Ltd [2018] ADO 5 the hearing officer found that, at the time of registration, the requester (the sole designer, Jarvie) and not the registered owner was the only entitled person to be entered on the Register as the owner of the designs. See s 52(2)(a).

Jarvie requested that the Registrar use discretionary powers under s 148 and reg 11.22 to transfer ownership of the designs. The hearing officer refused this request and indicated that if the designs had been at the application stage, ownership could have been transferred under s 30. Instead, under ss 21 and 55, the requester would need to apply for the designs and would be entitled to the priority dates that each originally had.

The Registrar has the right to decide in each case how to handle requests for s 52 revocation (see reg 11.24).

Figure 1 below shows the process for revoking a registration under s 52. 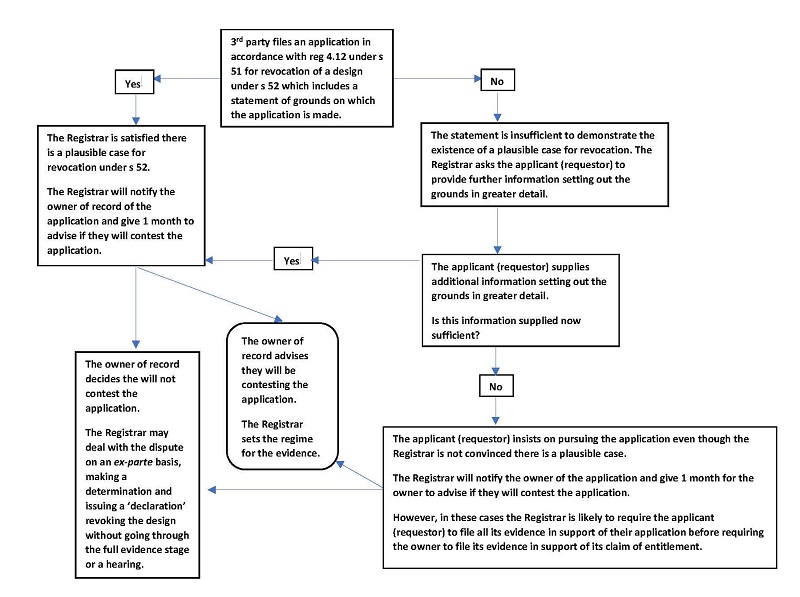 Section 51 and reg 4.12 set out the requirements for requesting revocation under s 52.

The application must include a statement outlining the grounds for revocation under s 52. This statement should demonstrate to the Registrar that there may be a plausible case for revocation.

The applicant needs to be able to provide evidence to support their statement. For example, if their case is based on an alleged breach of a written agreement, they should be prepared to file a copy of the agreement later if and when the Registrar asks them to do so.

If Registrar determines that there is a plausible case – or if the applicant insists on pursuing it anyway – the owner will be notified and requested to answer within 1 month whether they intend to contest it.

If the owner does want to contest the application, they will need to file evidence supporting their entitlement to register the design.

If the owner does not contest the application, the Registrar may be able to deal with the matter ex parte – i.e. issue a declaration and revoke the design without requiring more evidence or a hearing.

When the owner indicates that they will contest the request, the Registrar sets the process for submitting evidence. Typically that will be:

The evidence is in the form of declarations. Regulation 11.26 sets out the requirements for a declaration.

Either party can ask for more time to prepare evidence or for permission to file further evidence. The Registrar has broad discretionary powers to deal with these requests on their merits. However, the Registrar strongly expects relevant evidence to be filed as promptly as possible and takes a very unfavourable view of those who withhold evidence until the last minute.

Under s 127(1)(c) the Registrar has the power to issue a notice requiring the production of a particular document or article that could be relevant to the proceedings. This notice can be:

This does not happen often. Points to note based on Registrar of Trade Marks / Commissioner of Patents practice are:

If one of the parties in the dispute requests it, the Registrar can summon a witness for cross-examination.

This happens rarely. Points to note based on Registrar of Trade Marks / Commissioner of Patents practice are:

For an example of a contested summons to appear as a witness, see Airsense Technology Ltd v Vision Systems Ltd 62 IPR 409 and 62 IPR 413.

A declarant who attends a hearing might be called for cross-examination even if they have not received a written summons. (See Glass Block Constructions (Aust) Pty Ltd v Armourglass Australia Pty Ltd [2005] ADO 1 (6 January 2005)).

Both the applicant and the owner have to demonstrate their entitlement to register the design. (See George Stack v Davies Shephard Pty Ltd and GSA Industries (Aust) Pty Ltd [1996] APO 1; (1996) AIPC 91-241; 34 IPR 117, a patents case that also applies to designs).

If the hearing finds a mismatch between the people who were entitled to register the design and those who actually registered it, the s 52 case is proved.

The Registrar should issue a written decision within 3 months of the hearing, unless the parties are given an opportunity to file more material. As part of the decision, the Registrar may order one of the parties to pay costs for the hearing.

To revoke the design, the Registrar:

Registration by the correct owner after revocation

After an ownership dispute ends with the design being revoked under s 52, the correct owner can apply to register the design in their own name.

To do this, they follow the normal application process. They also need to:

If they later apply to renew this registration, the time period for renewal will start from the filing date of the original (revoked) registration.