22.4. Amendments: Inclusion of matter not in substance disclosed

Under both s 28​​​​​​​ and s 66​​​​​​​ of the Designs Act 2003, an amendment to a design is not allowable if it would “alter the scope” of the [application / registration] by the inclusion of matter that was not in substance disclosed in the design application​​​​​​​, representations​​​​​​​, or any other document filed as part of the original application.

This restriction is limited to matter that defines the design. This includes the product name​​​​​​​ and representations​​​​. This does not apply to other particulars, where the scope of the actual design is not affected. For example, applicant / owner personal detail​​​​​​​, convention detail.

The meaning of "in substance disclosed", as distinct from an explicit disclosure, has previously been considered in a patents context. In A.B. Volvo's Application (1983) 1 IPR 554, reference was made to the following High Court statement:

‘The substance must appear from the language itself interpreted in accordance with ordinary rules of interpretation with a knowledge of the prior state of the art to which the claim relates.’ (AMP Incorporated v Commissioner of Patents (1974) AOJP 3224)

In a designs law context, the substance will usually appear from the representations, based on similar principles.

Matter that was not explicitly disclosed can potentially be introduced by amendment. Amendment requests that are reasonable and genuine in terms of scope can be allowed. Chris Ford Enterprises Pty Ltd v. B. H. & J. R. Badenhop Pty Ltd (1985) 4 IPR 485 at 498 concluded [in respect of s 22B of the Designs Act 1906 (Cth)]:

‘It would seem that it is designed to exclude amendments which extend the scope in some fundamental way and make disclosures clearly beyond those already made. The terms of S22B(1A) are in a sense imprecise and call for the exercise of judgement. Reading the section as a whole it is proper to conclude that parliament intended genuine amendments reasonable in scope should be permissible and that the restrictive provision of S22B(1A) should be interpreted accordingly.’

Guidance on what is a ‘genuine amendment reasonable in scope’ may be ascertained from Ethyl Corporation's Patent (1972) RPC 169:

To put these decisions into the context of designs, the matter should appear from the original design application, representation, or other documents, be interpreted in a normal way and from the perspective of person(s) familiar with the product (to which the design applies).

To introduce matter not made explicit in the original design application, representation, or other documents requires it to be interpreted in a normal way, and to be matter that person(s) familiar with the product ordinarily expects to be originally included or would understand as being originally introduced. For example, an amendment that makes explicit details that person(s) familiar with the product necessarily imply from the representations.

Designs disclosed in other applications

If an applicant applies for an amendment based on a design that was disclosed in a different application, and the design has not been registered or published, the material must be placed on the current file and made available to the public where relevant.

An example of this scenario is an amendment request for an excluded design registration where the proposed design was originally disclosed in the initial application from which the excluded design is derived.

There is no time restriction on the use of disclosure in requesting an amendment. For example, a disclosure in a covering letter could be used as the basis for an amendment request many years after registration and certification. 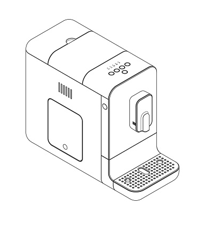 There is a request to amend the representation to include a coffee machine with integrated milk frother and amend the product name accordingly. The request includes matter not in substance disclosed, resulting in an unacceptable altering of the scope of the application.

An amendment request is received that seeks to amend solid line detail, included as part of the original design representations, to broken line detail. This amendment would be allowable as the change does not alter the scope of the design by introducing new matter. The line detail was in substance disclosed in the original application. The effect of the amendment is limited to the amount of emphasis placed on the line detail when assessing newness and distinctiveness if examination (of the registered design) occurs.

This type of amendment may also be requested under s 66. Whilst it may not fall foul of s 66(6)(b), it may be problematic when considering the other conditions that must be met to amend a design registration.